This high quality Enamel Tray allows your shampoo and conditioner bars to breathe and dry out between uses. The removable top plate has holes for easy draining and cleaning.

B
Beccy
Looks good but…

The dish looks good, but after about a week a few rust spots appeared. I cleaned them off and again they appeared. More rusty patches have now appeared and I’m not happy using it, it’s staining the counter top. I emailed Kind2 but had no response. It’s useless as a soap dish if it’s going to rust when a shampoo or soap bar is placed on it.

Edit: have had an email back saying they will replace the dish, so I’ll see how long new one lasts. 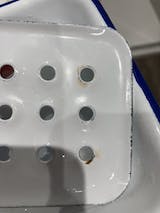 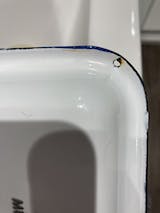 We love this pink one too! thanks Christine

The enamel soap dish is just right for keeping soap in the shower. Trying to avoid plastic, I first tried a bamboo soap tray, but it became very discoloured with the damp. This enamel dish is just the job & will last forever!

Josie, we love the enamel trays too! Bamboo might be cheap but it's certainly not great if it goes mouldy and you have to replace it. Thanks for leaving us a review

I have been trying to ditch the plastic bottles and find a shampoo bar to replace it. I have tried so many most of them did not do anything for my thick curly hair and left if lank and coated. I was horrified to find that although there was no plastic bottle some of the products had plastic in the shampoo bars. I carried out some research and found KIND which has no plastic in it and I was delighted to find the rebalancing bar and the conditioner bar actually works for me and I love it. I have had the products for some time now as wanted to make sure there was no build up on my hair before writing my review. I would highly recommend this product, it soaps up well, (especially if you make sure you wet your hair thoroughly) and leaves no residue on your hair. A great product.

I’m used to using head and shoulders and wanted to move away to something more sustainable with no plastic so gave this a go.

I found the product very drying with an unpleasant neutral chemical-ish scent and dandruff/itchy scalp came back straight away. Did not suit me at all I’m afraid.

We're sorry to hear that this bar didn't suit you. This bar doesn't have any fragrance added and we appreciate that's not to everyone's taste and dandruff can be caused by many factors. We've sent you an email to explore if one of our other bars is more suitable for you.

I got this shampoo bar on a recommendation for my partner who's dealt with dandruff for years and been using medicated shampoo for as long. They love it! No more dandruff without the need for v strong medicated shampoo and it has the added bonus of making their curly hair look great. Thank you!

Bought this for my daughter. She’s not a fan. It didn’t lather up at all and it made her hair look greasy and lank.

KIm, we're sorry to hear that you are disappointed. Conditioners (bars and liquids) shouldn't lather unless they contain detergents in the formula. We don't use any detergents in our conditioner bars, they are just concentrated ingredients to nourish. We've sent you an email to see if we can help with some tips on using the bar.

Wilma isn't a fan of bath-time but using the soap bar instead of shampoo in a bottle made the process easier and fuss-free. Plus, the smell is fresh but not overpowering and her coat was so clean, soft and fluffy as a result. 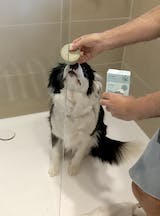